Counting the Omer
for Spiritual Development
and Racial and Social Justice

To honor the attributes of this week in the context of Social Justice and Antiracism,
we have compiled poems, quotes, images, an article and a prayer, along with daily exercises to move you from reflection to practice.

Here is a starting observation by Maya Angelou:

History, despite its wrenching pain,
Cannot be unlived, and if faced
With courage, need not be lived again.

Two possible Exercises for the day: Think about some key, seminal events in the twentieth and twenty-first centuries.  How have these events impacted your own family history, your own family stories?

And/or Think about what lovingkindness in Endurance/Perseverance means to you, and if you are willing, share your reflection with the community.

Poets may seek inspiration and echoes in the works of earlier poets.  Here is one such pairing when Maya Angelou (1928-2014) rediscovered the writings of poet Georgia Douglas Johnson (1880-1962).  Angelou and Douglas both describe the power of strength and endurance in the face of oppression, and the potential to rise with hope.

When I Rise Up

You may write me down in history

With your bitter, twisted lies,

You may trod me in the very dirt

Does my sassiness upset you?

Why are you beset with gloom?

Pumping in my living room.

With the certainty of tides,

Did you want to see me broken?

Weakened by my soulful cries?

Does my haughtiness offend you?

Don’t you take it awful hard

Diggin’ in my own backyard.

You may shoot me with your words,

You may cut me with your eyes,

You may kill me with your hatefulness,

Does my sexiness upset you?

Does it come as a surprise

At the meeting of my thighs?

Out of the huts of history’s shame

Up from a past that’s rooted in pain

Welling and swelling I bear in the tide.

Leaving behind nights of terror and fear

Into a daybreak that’s wondrously clear

Bringing the gifts that my ancestors gave,

I am the dream and the hope of the slave.

Two possible Exercises for the Day: From your perspective, what important family and community values have endured through the twentieth into the first decades of the twenty-first century?  What new ones have arisen as a result of the Global Pandemic? And/or What does Strength in Endurance/perseverance mean to you?  If you are willing share your reflections with the community.

Another poetic pairing, this time Angelou draws from an earlier poem about the singing of a caged bird as an emblem of yearning to be free.

Here’s an excerpt from an 1899 poem by Paul Laurence Dunbar:

I know why the caged bird sings, ah me,

When his wing is bruised and his bosom sore—

When he beats his bars and he would be free;

It is not a carol of joy or glee,

But a prayer that he sends from his heart’s deep core,

But a plea, that upward to Heaven he flings—

I know why the caged bird sings!

on the back of the wind

till the current ends

and dips his wing

in the orange sun rays

and dares to claim the sky.

But a bird that stalks

down his narrow cage

can seldom see through

his bars of rage

his wings are clipped and

his feet are tied

so he opens his throat to sing.

with a fearful trill

but longed for still

and his tune is heard

on the distant hill

for the caged bird

The free bird thinks of another breeze

and the trade winds soft through the sighing trees

and the fat worms waiting on a dawn bright lawn

and he names the sky his own

But a caged bird stands on the grave of dreams

his shadow shouts on a nightmare scream

his wings are clipped and his feet are tied

so he opens his throat to sing.

with a fearful trill

but longed for still

and his tune is heard

on the distant hill

for the caged bird

Two possible Exercises for the day: Think about how visual artists and writers have presented basic human conditions and situations in their works.  How can the experience of seeing an art exhibition or reading a novel with a social message or impact help facilitate understanding and insight about what it means to be human?

And/or think about what Beauty/compassion in Endurance/perseverance mean to you?

If you are willing, share your reflection with the community.

Harriet Tubman was an American abolitionist and political activist.  Born into slavery, she managed to escape and helped many others escape through the Underground Railroad.  One of her most famous quotes underscores the need for Netzach – strength and endurance – in efforts to Tikkum Olam – heal the world. 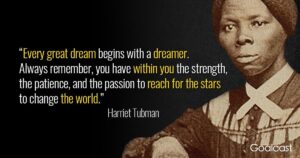 Two Possible Exercises for the day:  Think about how one individual’s vision, strength, courage and endurance can make a difference, impact positive change in the world.  What other women, in addition to Harriet Tubman, come to mind in this context?

Are you truly an antiracist? An article for self-reflection

As an antiracist, it’s so important to be unequivocal in your positions. Unfortunately, culture change requires strong, clear, persistent force, and each individual contributes to that force through their words and actions. While the antiracist’s position is clear and unequivocal, the “non racist” is more often vague (or silent) – their words could be interpreted differently depending on the interpreter. This phenomenon happens all the time in meetings, press conferences, informal discussions and certainly on social media…

The unfortunate reality is that laws and policy alone won’t shift a corporate or societal culture. Part of what shifts a culture is social pressure – the feeling that the previously acceptable offensive posts, actions, or decisions are no longer acceptable and will be met with disdain and push back. One powerful way to create an environment of social unacceptance is being absolutely firm and unequivocal in our statements, actions and positions related to racial justice…

If you’re not doing or saying anything that makes you feel uncomfortable, you’re probably still languishing in the murky “non racist” space and haven’t quite made it to antiracist. Discomfort is simply part of progress. I can’t think of any significant human or civil rights advances that happened without conflict and discomfort. Anyone who has cultivated a healthy long-term relationship or team knows that conflict is part of the process of getting there. Conflict provides the space for people to see themselves authentically while avoidance perpetuates denial.

When you speak up in a meeting, question someone’s assumptions or suggest changing a process or policy, those actions will likely make some people uncomfortable, and that discomfort should be embraced (not avoided) as a necessary part of the process…

People who find themselves doing a lot of explaining are often doing so because their words and actions are either ambiguous, contradictory or both. If you find yourself frequently explaining what you meant to say, why you didn’t speak up during the meeting or what you wish you’d said, consider that a sign. Instead of explaining incessantly, reflect on what you would’ve done if you weren’t afraid. Oftentimes, those who are busying themselves with lots of complicated discussion and rationalization aren’t actually doing a whole lot…Stop explaining and start doing.

While most “non racists” may not choose to socialize with those with racist views, the real question should be how do those with racist views feel around you? If they feel completely comfortable telling their jokes, belittling others or hurling microaggressions, then you’re clearly not doing enough. Again, the oxygen enables the fire. Laughing along, saying nothing, changing the subject isn’t resistance, it’s acceptance…

Note that “anti” is inherently active, not passive. Therefore, if you’re not voicing opposition or rejecting racist views, comments or actions, you’re simply not being anti racist – you’re being racist tolerant…

Truth be told – most of us want comfort and security along with radical values driven change, but those don’t always coexist. Actually, it’s our willingness to sacrifice that clarifies our true values. While it’s true that speaking up and challenging the status quo doesn’t come without risk, too often we engage in negative fantasies of worst-case scenarios that rarely if ever would actually materialize – instead, they just become a scapegoat for our complacency…

Two possible Exercises for the day: What kinds of options or opportunities are available today to become involved in social activism?  Which resonates most strongly for you?  What steps can you take to become more actively involved?

And/or think about what does Sincerity and Splendor in Endurance/perseverance mean to you?  If willing, please share your reflection with the community. 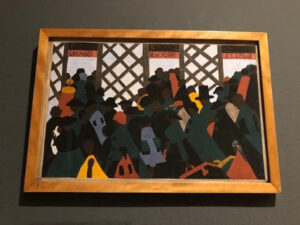 From the Migration Series, which tells the story of the Great Migration of more than a million African Americans from the rural South to the urban North in the early decades of the 20th Century.  Jacob Lawrence, an African-American artist, ultimately painted 60 panels.  Thirty panels are in the Museum of Modern Art in NYC, and thirty are housed at the Phillips Collection. 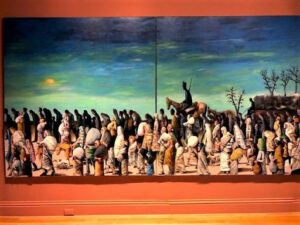 Benny Andrews (1917-2000), a White artist who drew up in the South, painted another series on migration and displacement, both of African-Americans and native peoples.  In this wall-sized painting, the forced move from Indian lands to US Government-mandated reservations is stunningly depicted.

Two Possible Exercises for the day:  Make a list of the kinds of journeys that have been part of the different phases or stages of your life.  What have you learned about yourself as a result of making this list?

And/or think about what Building a Foundation in Endurance/perseverance means to you.  If willing, please share your reflection with the community. 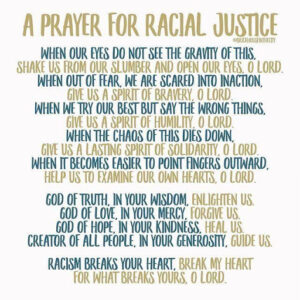 From the Social Justice Resource Center

Two Possible Exercises for the day: How does the prayer for racial justice reflect key aspects of being a “mensch”?  Can you think of other qualities that could be included?

And/or think about what Majesty and Humility in Endurance/perseverance mean to you?  If willing, please share your reflection with the community.