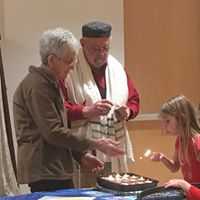 Herb was raised in an Orthodox home in Baltimore, completing the high school department of the (then) Baltimore Hebrew College, in addition to public high school. Through his college years, he became disconnected with the    Judaism that he was raised on, but began to reconstruct Judaism to address the social change commitment he made in his life. The day he picked up The Freedom Seder by Rabbi Arthur Waskow was the day he learned that Judaism could be made relevant to his own concerns. He spent over 40 years working in affordable housing as his contribution to Tikkun Olam.

He’s been active in Kol Ami since December 2000. During that time, he’s led more than 150 services, been active in the Steering and Ritual Committees, served as Administrative Coordinator, and drafted the Haggadah that he uses to lead the Kol Ami Second Seder. What he loves about Reconstructionism is its intimate connection to Judaism, its thoughtful approach to services, the sound of guitar and tambourines during davening, and the fresh ways Kol Ami connects to HaShem. He feels the joy of continued bonding in our growing community and meeting new people who feel like old friends.