Positive Aging Blog: December 2021 – Holding on to the Light 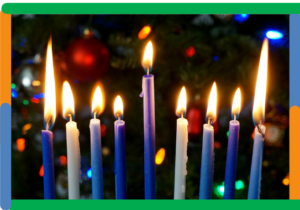 Holding on to the Light

Here we are at that time of year when some Jewish people become uncomfortable about the comparisons between Christmas, a major Christian Holiday, and Chanukah, a very different minor Jewish Holiday, which has been commercially pumped up in attempts to create a grander event, when Chanukah is already is a lovely, home-based holiday, with simple and unique celebrations and meanings.  Should we really give the grandchildren one present each night?  Should we sing along to Christmas carols that use words unfamiliar to Jewish ritual and belief? You decide.

I am excited to share with my readers, a whole new aspect of this odious comparison thing, thanks to a lucky lunch stop at one of my favorite Indian restaurants a few days ago during a celebration of the Indian holiday called Diwalli.  It turns out that these three very different holidays – Christmas, Chanukah, and Diwalli – with very specific meanings to each group –  actually share a common thread – all three recognize the downturn of the year as autumn slowly changes into winter – a universal theme.

From the dawn of time, when Adam and Eve, expelled from Gan Eden, began to experience colder temperatures, and shorter days, human beings have been emotionally affected by climate change.  I use a special light when I am typing now, to help stave off a minor depression that often takes hold  right after we return to Standard Time.  I have read somewhere that it is most likely that the Nativity events we read about did not actually happen in winter.  At some point, the Christian religious leadership may have decided that the holiday would be more productively celebrated in winter.  Actually snow in Israel’s at any time of year is very rare.

So what is going on here?  There are probably many other world religions that include a winter holiday that features light.  I may learn about some of these by chance, in the same way the beautiful sari-clad Indian woman, the music, the wonderful food, and the bright lights of Diwalli showed me how the Indian people of Asia do their best to hold onto the light.

Let us all hold on to our inner light and may G-d keep us through the coming winter.  Always seek the similarities and avoid the differences that often lead to conflict.